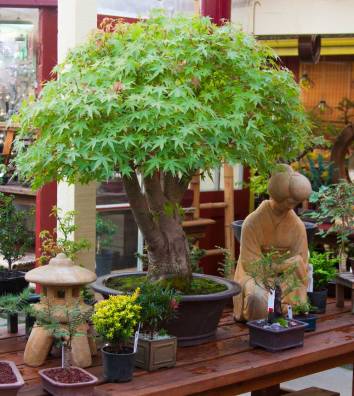 It’s a funny thing about life and gardening, they return to their beginnings.  So it is with bonsai at Garland Nursery.  We have enjoyed a good relationship with Wee Tree Farm and then Wee Tree, LLC. since 1986, both separate businesses with wonderful owners.  However, that’s not where Garland Nursery’s connection to bonsai began.

It all started in the 70’s with a dear, kilt-wearing Scotsman named Stuart Fraser.  He was a unique and multi-talented individual.  I remember taking work breaks with him in the old glass greenhouse, since torn down.  There he sat with coffee and cigarette, plus Triscuits and cream cheese.  He enjoyed sharing, in his lovely Scottish brogue, about his life story, which included time living on a tea plantation in India.  He was a landscape designer, an avid fan of heaths and heathers, and an expert pruner.  Also, he had a passion for bonsai.  He talked my parents into opening a bonsai department.  Some company must have been doing cabling work in the area, because the display tables were mostly large wooden spools in a couple different sizes.  Stuart had a work table and stool in the bonsai area and he would work on fashioning the plants into wonderful works of art.  In fact, the bonsai area is right where it remains today.  Stuart hand-lettered signs for the bonsai in Japanese characters.  I remember being amazed at that knowledge of foreign symbols.  We sold pots, wire, plants, tools, figures and those wonderful finished bonsai.  I don’t remember about selling soil, but I do remember Stuart sifting soil before it went into a bonsai pot.

All things change and eventually Stuart moved with his wife, a new lawyer, to Portland where she joined a law firm.  He continued to come down to the Corvallis area to do pruning for many of his former customers.  He would stop in to visit, when he was down this way. 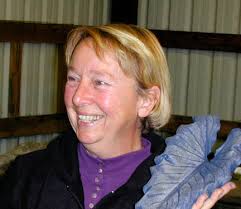 In the early 1980’s, Garland Nursery hired Diane Lund.  Diane hailed from Minnesota by way of Alaska and she had a passion for bonsai.  Diane soon took over managing the Garland Nursery bonsai department.  Also, she rented a home on the nursery property.  In 1986, Diane decided to take the plunge of operating a wholesale bonsai business.  She named it Wee Tree Farm and worked out an arrangement with my parents, Don and Sandra, to take over the bonsai

department operating as a separate business (what those in the business world like to call a concessionaire.)  She used land at the nursery next to her dwelling for plants, eventually building a greenhouse and office.  She imported pottery and had bonsai soil specifically made with the Wee Tree name.
As her sales expanded she needed more room, which she found in Kings Valley.  She began online sales, eventually hiring Dan White to operate that.  She had a longtime manager of the retail space at Garland, by the name of Peggy.  When Peggy retired, Diane hired Rose Bailey.  Again lives

changed and Diane decided it was time to return home to Minnesota.
In 2014, Dan and Rose bought Wee Tree Farm, renaming it Wee Tree, LLC.  Rose poured her heart into the retail portion and Dan continued with online sales.  Sadly, Rose and Dan decided to close Wee Tree at Garland Nursery on September 19, 2016.

Garland Nursery had a big decision to make, whether to continue
with a bonsai department operated solely by us.  We’re talking 30 year

s since the nursery has managed a bonsai department.  Are we up to the challenge?  We hope so.  Brad Saindon, is managing the area. He is a former college and Olympic volleyball coach who now is using his coaching skills in the bonsai department.  We are happy to have helping us Dr. CJ “Bud” Weiser, former head of the horticulture department and Dean of College of Agricultural Sciences at Oregon State University. Since
retiring 23 years ago, Bud has pursued his artistic interests in styling, growing, and selling finished bonsai trees and sculpting in stone and bronze.

There are many other staff contributors to the new/old bonsai department at Garland Nursery, giving it a little twist.  Kathy and Erica worked hard to redesign the space and display product.  They have incorporated different items into the space, including Asian statuary, gongs, and an inviting patio set.  Theo,  a second generation Garland staff member, is helping out with set-up and learning a lot about growing bonsai.  Brad will be the primary person in bonsai, Wednesday through Saturday, and most Sundays.

The bonsai area is now fully open.  We hope you take an opportunity to come out and take a look.  As we learn and grow, please feel free to offer us

feedback about items we may be missing.  There will continue to be bonsai classes/workshops on the second Saturday of every month at 11 am.  Brad, Bud, and guest teachers will be conducting these sessions.  The next one is on November 12th and will cover Over-wintering Your Bonsai and related topics.

Finally, a word of thanks to everyone (some named here and some not) that have contributed to bonsai at Garland Nursery for the last 45 years.  It’s been a pleasure working with all of you. We look forward to continuing the Garland Nursery tradition of offering one-stop shopping for all things bonsai.